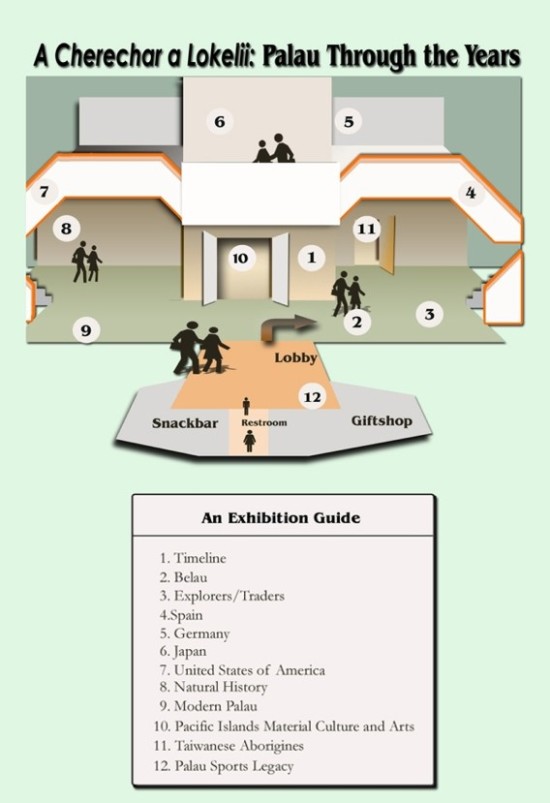 A Cherechar a Lokelii is a timeline of Palau’s cultural heritage and history. This historical exhibit is composed of three-part display from pre-contact Palau to contact periods of Spain, Germany, Japan and the US to Palau today. An exhibit of Palau's natural history as well as visual arts will make up this entire exhibit. Republic of China is also exhibiting its Austronesian people’s culture.

The exhibit features objects and images of the Palauan culture and traditions handed down from generation to generation including beliefs and custom practices, structures, weapons and tools, containers and utensils, and other necessities as they were used. Also displayed are documented accounts of sightings of the Palau islands by foreign sailors including an actual acquaintance established by Palau's High Chief Ibedul with Captain Henry Wilson and his crew from the Antelope. This was the first recorded account of foreign contacts in Palau and the introduction of foreign materials.

The Cycle of Life exhibit provides an overview of the cycle of life in Palauan society starting from the celebration of birth and ending with the celebration of life’s final achievements in death. It is seen through an ethno-botanical perspective- the importance of plants in the lives of Palauans.

There are five themes being showcased because of their significance in a person’s life which include Cheroll (Childbirth) and Omesurch, Omengat and Mo-Tuobed (Herbal Hot Bath Process and Ceremony); Mesei (Taro Patch); Omenged (Fishing); Bai (Men’s Traditional Meeting House); and Kemeldiil (Funeral). All these themes are tied with a focus on the Uum (Kitchen) that binds all the customs together in harmony between families and clans.

The relationship between Palau and Spain goes back over 485 years; from the initial forays of Spanish explorers since 1522, to the colonial administration of 1885-1899, through to the 20th Century with the presence of the Spanish missionaries up till the establishment of the Republic of Palau that saw the two countries strengthen their ties.

Aside from the regular line of commercial ships, Spanish warships would occasionally criss-cross the islands to keep contact with local authorities and Spanish missionaries, mediate in internal fights, and observe the presence of black birders and Western traders, who had committed many abuses in the past. People feared the presence of these foreign ships but the presence of the Spanish naval vessels helped build the people's confidence and trust in the Spanish authorities.

During the 19th Century, colonial powers were expanding over the world to establish themselves in different territories, who peoples were considered "uncivilized" by Western biases. Germany had some economic interest in Micronesia so, in August 1885, it tried the annexation of some of the Caroline Islands, such as Yap. At that time, Spanish authorities had no physical presence in the Carolines, but European countries had considered the islands to be under the Spanish Crown.

The people of Palau were unaffected by the conflict over the Carolines, but shortly after the arbitration, Spanish authorities sent a ship from Manila to also lay claim over the archipelago. A handful of missionaries disembarked in Koror and began the evangelization of the inhabitants. This marked the beginning of the Spanish colonial administration in Palau, which lasted until 1899.

A significant consequence of the establishment of the Spanish administration in Micronesia was the increase of inter-island travel from the Carolines to the Marianas and Manila, and vice-versa. The official line of Spanish steamers connected the territories every few months.

Japan administered the Palau Islands for 31 years, from 1914 to 1945. After World War I broke out in 1914, Japan, an ally of the United Kingdom, declared war against Germany. Japan occupied Germany's colonies in the Pacific Islands, Including Palau. At the end of World War I, the Treaty of Versailles (1919), a peace treaty signed between Germany and the Allies, determined that the former territories of Germany would not be returned to Germany. Instead, Japan became a mandatory of former German territories in the Pacific, namely Marshall Islands, Northern Mariana Islands, and Caroline Islands, which included Palau, as a mandate of the League of Nations.

In response to the enactment of the Treaty of Versailles, Japan established the South Seas Government (Nanyocho in Japanese language, and officially translated as South Seas Bureau) in 1922. Its headquarters was located in Koror, which made Koror the "capital" of the entire Micronesian region.

Japan exerted efforts on the education of Micronesia people, economic development, and betterment of hygiene and sanitation matters in pursuant to the responsibilities and obligations set by the League of Nations. A comprehensive infrastructure development made Koror resemble a city of Japan. A number of Japanese people immigrated to Palau, and contributed to the economic development of Palau. The number of Japanese who resided in Palau reached around 15,000 by 1938, which accounted for 70% of Palau's population.

The Japanese administration continued until 1945 when Japan was defeated in the Pacific War.

The impact of Japanese era on Palauan culture was significant as some of Japanese culture and system, including language, food, architecture, songs, and land register, that were introduced during Japanese time, remain in Palau even today.

This was entirely a new experience for Palau and the Palauan people. This was the period of the US Military administration in Palau. The Palauans not only had to rebuild their lives following the trauma of the ware, they also had to deal with a new administrator whose customs and language were very strange. The new overseers also talked about strange ideas and concepts such as democracy, elections, majority rule, higher education and so on.

This period is represented mostly by photographs of Palauan traditional leaders meeting with US Military officials, photos depicting evidences of public governance such as the Palau Congress Building. The Palau Congress was organized in 1947. Other photos show people involved in activities relating to medical and school programs.

The US military administration ended in 1951 and civilian rule was established in Palau with the US Department of the Interior at the helm. During the decade of the fifties municipalities were created, and one public and several intermediate schools were established. It was also during this period that many young Palauans, both male and females, began traveling outside Palau in search of higher education. The Kebtot el Bai was constructed at what is now the site for the PNCC Koror Office and the Olbiil Era Kelulau, successor to the Palau Congress, received its charter in 1956.

A period when Palau and Palauans became actively involved in Micronesia-wide activities in all phases of island developments. Many migrated to other islands in Micronesia, including Guam and Saipan, in search of better economic opportunities. With the transfer of the Trust Territory Headquarters from Guam to Saipan and the establishment of the Congress of Micronesia in the early sixties, many Palauans found employment in Saipan and became some of the driving forces in those two institutions. Many of the pictorial records for the period dealt with Trust Territory and Congress of Micronesia activities.

Period when Palau began the process of political separation from the other islands in Micronesia in search of its own future political status. Photographic records for the period are replaced with pictures of referendum activities and political debates, including activities relating to the organization of Palau’s first Constitutional Government.

The Republic of Palau was born on January 1, 1981 when the Palau Constitution took effect and the officials elected to run Palau's first Constitutional Government took office. The Compact of Free Association between Palau and United States was negotiated during this period, but was not approved in seven plebiscites by a seventy-five percent vote margin required by the Constitution.

Early in the decade of the nineties Palau Constitution was amended to allow the Compact Treaty to be approved by only a majority of the votes cast instead of a 75% vote margin. The Constitution, as amended, was approved and Palau became an independent state in Free Association with the United States on October 1, 1994.

Taiwan, a solitary island on the western edge of the Pacific Ocean, has 36,000 square kilometers with 23 million populations. It located in the southeastern coast of Mainland Asia, across the Taiwan Straits from Mainland China. In the North, there are Japan and Okinawa, and in the south are the Philippines.

It's located on the western edge of the Pacific "rim of fire," Taiwan is shaped by the tectonic movement and has been created grand peaks, plains, coastlines, basins, and other magnificent sightseeing attractions. Due to different types of climates, such as tropical, sub-tropical, temperate, Taiwan has clear seasonal differentiations. Beyond, there are about 18,400 wildlife species on the island. Endanger species are about 20% of among the wildlife, such as Taiwan mountain goat, Formosan black bear, and Mikado Pheasant.

Although most of the Formosan Aborigines are acculturated by Han Chinese culture, still, there are fourteen ethnic groups who remain part of their traditional cultures and have been officially recognized—the Saisiyat, the Atayal, the Amis, the Bunun, the Puyuma, the Rukai, the Paiwan, the Tao, the Thao,the Tsou, the Kavalan, and Truku. Shung Ye Museum of Formosan Aborigines' mission is to preserve and represent various cultures of indigenous people in Taiwan.

Thousands of years ago, some scientists believe that Taiwan was the birthplace of the Austronesian language family, and perhaps the Austronesian people. Today, amidst a bustling, industrialized nation, the indigenous cultures of Taiwan still thrive, in living testament to the unity of the peoples of the Pacific. The new exhibition at the Belau National Museum highlights some of the most fascinating aspects of the 13 tribes of Taiwan. Those of you who have seen the Tao canoe on the stage of Ngarachamayong have perhaps felt the unity of the material cultures of Taiwan with those of the other pacific peoples, yet the exhibition also showcases some of the unique aspects of each culture. The floating fish trap of the Thao people, used in the mountain lakes of Taiwan, the wickedly curved knife of the Kavalan warrior, and the beautiful feathery headdresses of the Amis people are all testament to the diversity of the indigenous Taiwan peoples. Like the udoud, the beads of the Paiwan have mysterious origins and cannot be satisfactorily counterfeited even today—further evidence of the cosmopolitanism and ingenuity of the Austronesian people. We hope you will be able to join us and learn more about our shared cultural roots, and the traditions that have enabled the indigenous peoples of Taiwan to prosper for thousands of years.

Kaeb was the most accomplished achievement in the art of canoe construction. According to legend, the characteristic curvature of the deep bow was copied from the clan of the flying fox. The whole fore part of the canoe rode out of the water; and a long section of the keel was visible, giving it the appearance of dropping off at the stern. The slim hull enables the canoe to attain great paddling or sailing speed.

Ornamentation was simple but impressive against the red paint. A Micronesian kingfisher (Halcyon cinnamominia) present on the first thwart bars assured the good luck of the craft on each of its voyage.

The giant war canoes, with hulls reaching about 15 meters, could carry 32 paddlers. There were three booms to the outrigger instead of the usual two. Ornamentation, including mosaics made of shell pieces, was much more elaborate than that of other Palauan canoes. At the very tip of the bow and stern, there were often shells strung on cords. Kabekel is the only Palauan canoe without a sail.

Hatohobei canoe made for fishing, transportation, and cargo. Carved by Lorenzo Simeon as a gift from Hatohobei State to Belau National Museum 50th Anniversary.

From the Palau Community College, follow the Belau National Museum signs uphill toward Koror Elementary School and continue beyond the school until you reach the museum.